I must admit, the astrology was amazingly accurate. Just look at the report below I wrote last month. The astrological count correlated so well with the stock market action. The fact that the U's were more than D's predicted the market would go up. Even the prediction for oil was correct. So I will continue to use the same model.

The report is in three sections. The Mars Table, The Planetary Aspect Tables with values. The Neptune Tables. 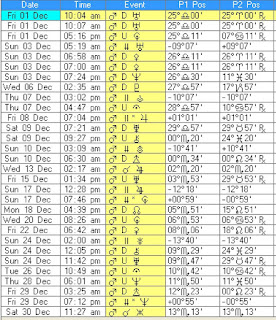 If you look at the Mars Table above you will see the aspects Mars is making to the outer planets. Traditionally astrologers used to look at this table only. It has proven to be more of a background aspect. Imagine that there are times the Sun, Venus and Mercury and others are not making any of the main aspects I look at, then it will be the Mars aspects that would impress. As you can see U's are more than D's this month. In basic terms that means that Mars is more positive this month than last month. Last month we had it with more D's and I pointed out that the market would react more to the other planets and Sun and it did. The markets have moved up to new highs. This month is even more so.

Below are the tables for the aspects made by Sun, Venus, Mercury and others are making to each other. I have a certain set of aspects that I have categorised as U's or D's. That is the added value this work creates. It has taken me all my life to perfect it. And it still goes wrong, even though it was spot on last month. I only count the GMT PM count for the business days. You will need to look at your time zone and market. The rule is simple. If you see two or more of the same type of aspect within a few hours, then that will be effective. The more the stronger. If you see three or four in a couple of hours then it is very rare and strong. If you see nothing for a couple of hours then it will be flat, after being opposite to what it was. Try it with whatever it is you are looking at. It does not need to be the markets. I work in a call centre and I correlate it to the mood of people as I talk to them. So you may be a top financial manager, or a person in a sales team. It even works with animal, or herds, or children moods. We are talking about the change in the force that binds our corner of the universe. It binds and separates us. Some humans can intuitively sense it but it is not obvious to all. These tables show the polarity that creates the energy. 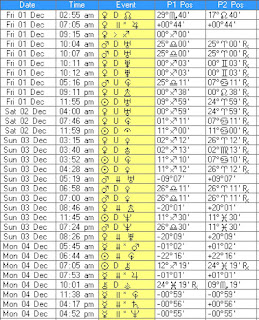 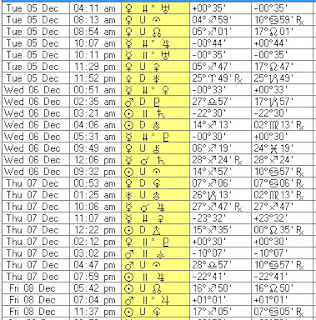 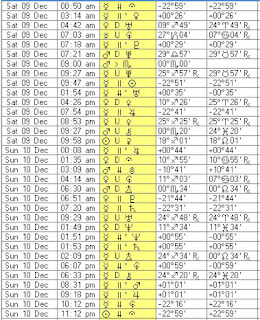 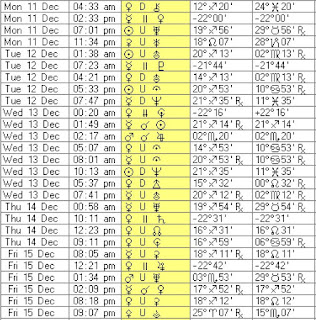 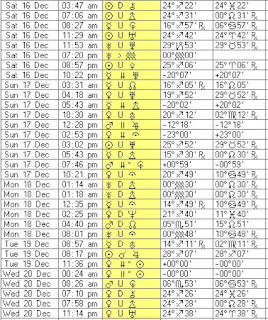 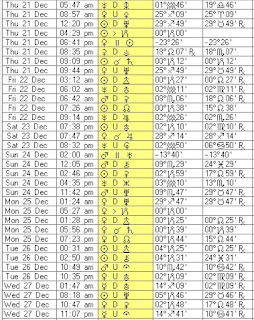 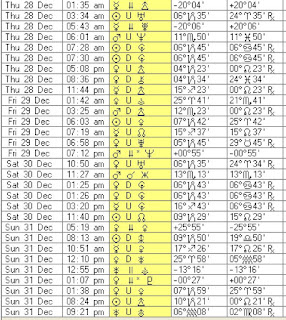 For each business day I have counted the GMT PM. Quite simply there are no moments when we have a lot of D's. The U's have it. So this market is going up even more. I know what you are thinking. Is it the US tax reform? Isn't it over bought? That is what logic tells us. Look at any technical analysts conclusions and they will tell you it is over bought. Every brave techie is shorting this market and is losing money. The only system that has predicted the market is going up is this one. And yes it is going higher. It has to do with the angle of the planets when US and PM EU is trading. That is the conclusion on that count. And it works most of the time. As I said last month we will get a period in the future or there times in the past when the exact opposite is true. I will point it out when we get there for free a month in advance. But if you want to know a lot sooner it will cost you.

Below are the angles made to Neptune give us our sense of imagination. Commodities follow it. Oil in particular. I am not counting the number of aspects. You can do that. It is easy. And it looks like most of the D's are not during business days. So oil is going up even more. 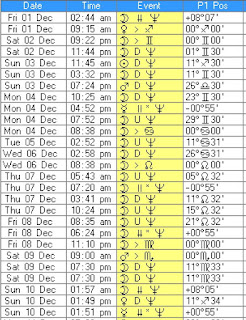 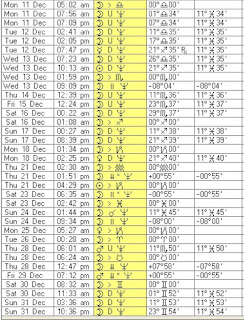 In conclusion we are going to go higher and higher. It will defy all logical analysis. An amazing sense of positivism is gripping our planet in this part of the universe. Enjoy it.  Remember this is not to be used for trading.

This report is designed to find the moments when the planetary angles correlate to human behaviour. In particular it is being applied to stock market and other markets behaviour. I have been doing this for the best part of my life, and in all honesty I cannot say it is full proof. But there is something in it. I am just like you. I create the report and look at it everyday to see what the values are, and then see if the world I live in correlated to it.

Last month was supposed to have high volatility for the markets, and yes we did have some big moves. I posted those on my Facebook page. The easiest way to use this report is to see when there are a few aspects in a row in a few hours, and then see whether your trading instrument follows it. If you see a pattern, then use it. Only you will know the result. I tend to find high volume instruments correlate well. So world indices like Dow Jones work well when the angles are strong. Conversely you will find the markets are flat when there are no aspects in a few hours.

Mars aspects give the background, then we have the inner planets to the outer planets, which have the PM or US trading hours values underneath. Then there are the aspects to Neptune, that sort of correlate to oil. Remember this is just for fun and not for trading. I have put comments under each section. 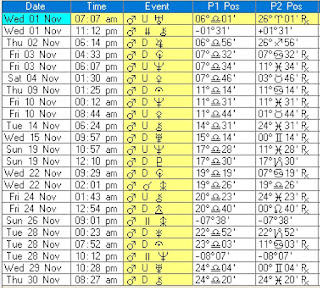 Mars aspects look balanced if you total the number of U's vs D's. But there are more D's focused than U's. So the balance is on the D's side most of the time. But hold on and read the next section. 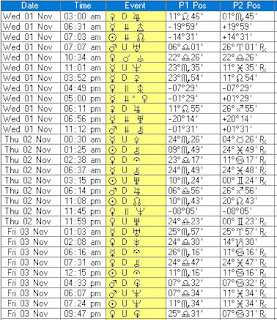 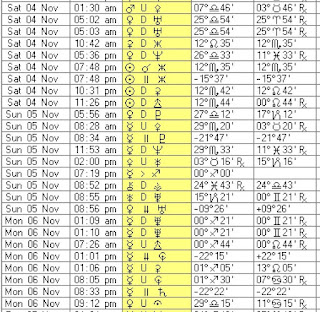 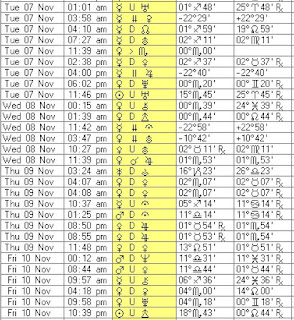 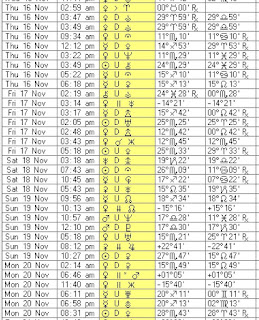 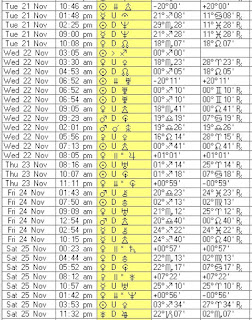 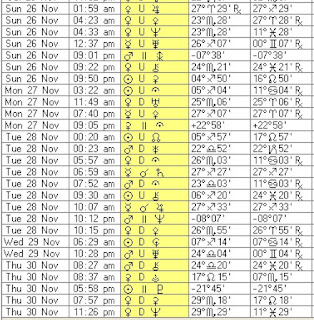 In as much as Mars on its own looked more focused on D's, if you look at the inner planets, you see that the U's have it most of the time. So U's mean that the market wants to go up and that is where astrology defies logic.

When that day is you will only find out by looking at the monthly reports here or pay a lot and get the long term report. So if you are fed up with logic then you will understand this work. 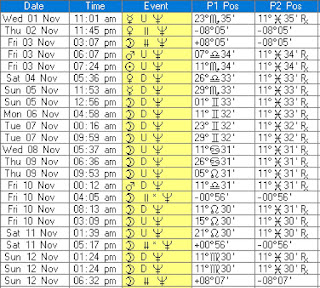 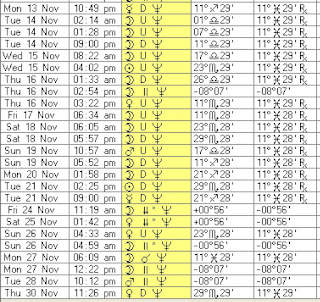 And finally we have the aspects to Neptune. Again it looks like we have more U's. So oils are going up as well.