At last count there were 88 updates put in the Facebook post last month. Very detailed correlations were discovered between planetary positions, geomagnetic activity and the stock markets.

It was shown that the background aspect of Mars sets the general mood, and the faster planets reinforce it, when they are the same, especially when we have a couple in an hour or two. Of course the opposite is also true, when the faster planets are not the same type as Mars, and the markets vacillate. What was very interesting, was how counter-parallel and parallel aspects, played such an important role.

But the best correlation was the extremely close relationship with Sun Spots and geomagnetic activity as shown by NOAA. For hundred of years astronomers have made observations on agricultural cycles, economic cycles to Sun Spots. However the correlation to Sun Spot maximum and minimum is not perfect.

It is at this point where Geomagnetic Activity becomes important. The effect of Sun Spots on the Earth's Geomagnetic Activity, is where the correlation becomes perfect. This has been shown for every hour of every day. It is startling. I am still waiting for it to fail. It has not failed yet.

So we need to look at all three; Mars, faster planets and the Geomagnetic Activity.

GENERAL GUIDE AND THE TRIGONOMETRY

I have spent all my adult life coming up with these home made tables. They show in simple terms of U's and D's, whether an angle between planets is up or down for the market. These are specially selected angles. The other symbols are parallel and contra-parallels. I have summarised the angles in US trading as a guide. You need to look at ones for your time zone. All times are GMT which is 4 hours ahead of EDT.

The rule is simple. The more there are of the same kind, the more power. And if there aren't any, the market is flat. Or to put it correctly the mood is flat. This is a force that binds us. It is Ahuramazda which flows between Ohrmazd and Ahriman. A bit like Chi between Yin and Yang. A bit like the current that flows between positive and negative in a battery. This energy varies according the angle the bodies are making to each other. So it is all about trigonometry.

The aspect that Mars makes is very important. It sets the tone when other faster planets are not making any close aspects. It begins to act when it is about one degree away.

By faster planets I mean Mercury, Venus, and Sun (not a planet of course). They change their angles a lot more quickly, so they are fast in my book.

Below there are three sets of tables. Mars, Faster Planets, and Aspects to Neptune. The way to use the tables, is to look at the result comments under the tables. But keep an eye on the Facebook comments. 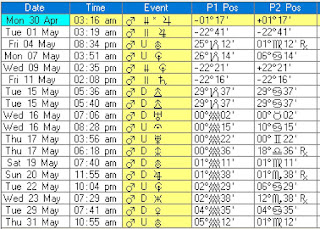 Mars is pretty much all D's in May. 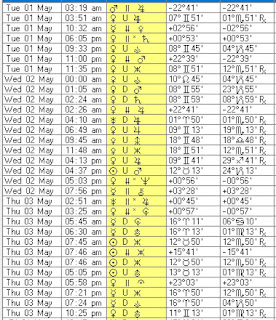 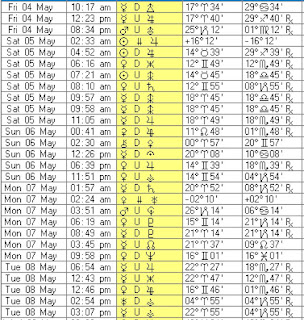 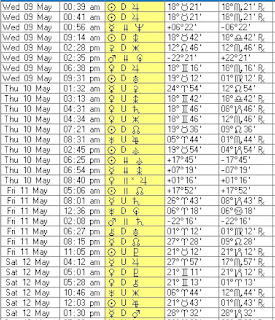 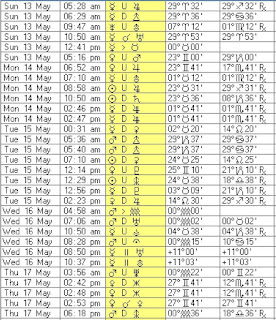 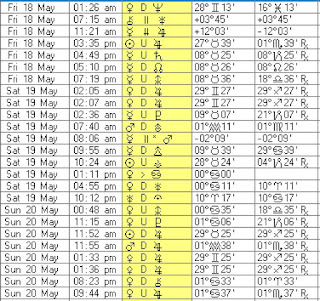 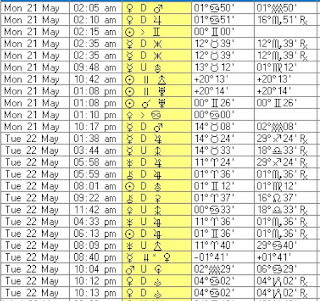 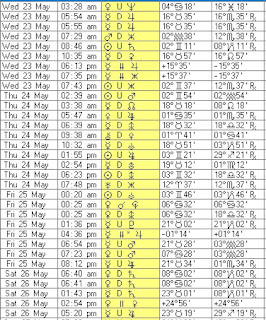 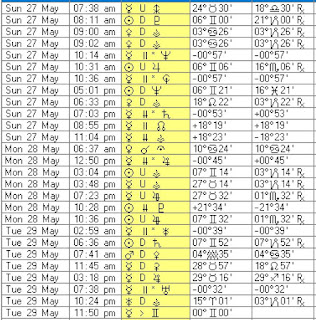 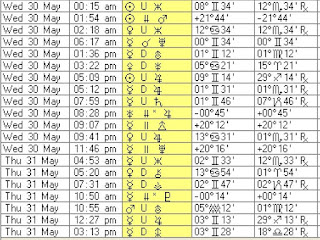 It looks like we have some very strong days with powerful U's and D's in US trading hours. Mostly D's. But best to read the Facebook comments, as and when I post them, the night before each day. 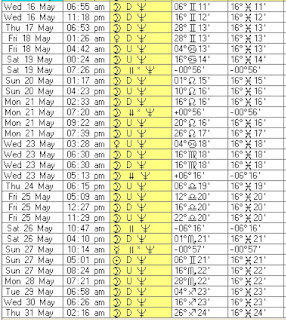 Neptune continues to elude. I tend to look at the lunar aspects when they are focused. Otherwise looking at the few planetary aspects they look like more D's or hard aspects.

After all this, you want to know what is the basic trend. Is it a big up? No, after the first week. Is it more down, yes later on. But you need to read the Facebook comments to get the full picture.