In this report, astrology moves the people's sentiment and in turn effect markets.

The results were fairly impressive. The best part was predicting the couple of days that the US market did go down. You can see that at the Facebook site. To pick the two days that went down was the hard part. The easy part was predicting that it would continue to go up. The cherry on the cake was the very last day, as we had both strong D's and U's and the market reacted very well, no matter what the US President, Fed Chairman, or any single large cap stock did to the value of Dow Jones.

Explanation of the Astrology Prediction Tables

What I do, is to display the tables that I have worked on for 40 years.  It is my own work. I have a special filter that selects special angles for planets, and other stellar entities in our solar system. The best way to explain it is to look at our solar system like a very small object from a point very far away. You then can see and appreciate the energy flux inside it around Earth as different material bodies move about. All I do is to tabulate them against time. I then simplify it with U's and D's in the tables below. There is a table for Mars, then the planets that are moving faster than Mars, and then angles to Neptune. In this work three outcomes are important. U's, D's and when there is nothing. You will see a summary for each PM business day in PM EU and US. All times are GMT. Look at moments when there are a lot of U's or D's in a few hours. I have marked them in bold. If you do not see any in a few hours then Mars angles apply. It is as simple as that. It is pure maths. It is not me. All I do is present it, and with my bad eye site I make typing mistakes and miscount. It is a labour of love. Please do not take it too seriously. Just be curious. Use it to gauge human or nature. It works really well when there are a lot of U's and D's focused. It does not work well when there is no or little angles. I will post comical posts at the Facebook page, just because it is really a sort of entertainment. 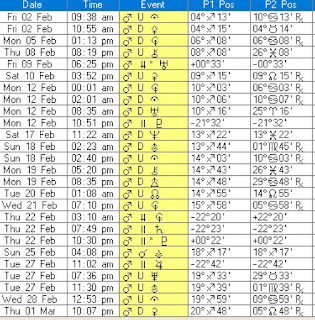 As you can see there are far more U's than D's. So the background force is positive most of the time in February. But the first half of February has more D's than U's. So it will be down then up. But we need to check the other planets in the tables below to see how they are doing for each day.

Below are the tables for the faster planets. Look at each days count, then read the summary at the end. Basically the fast planets are measured to see if there are 2 or more U's or D's, or an imbalance in PM EU or US trading. 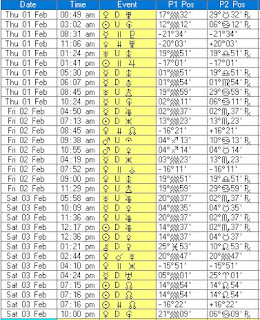 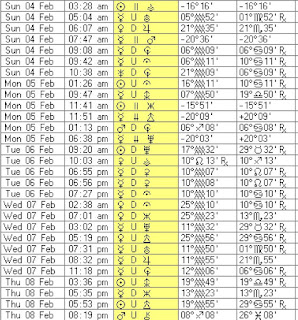 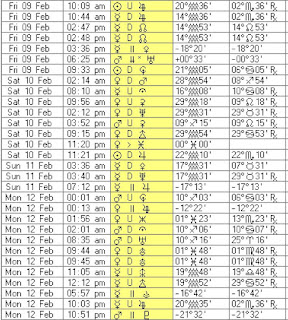 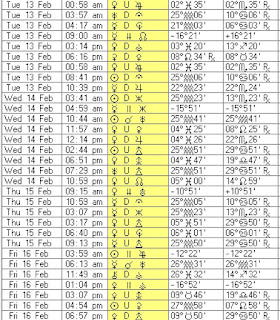 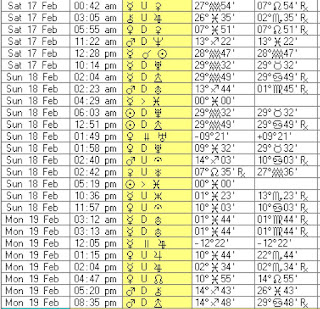 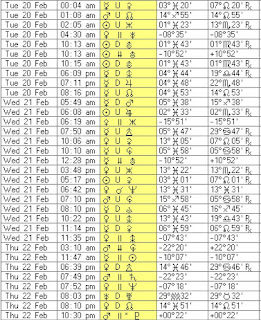 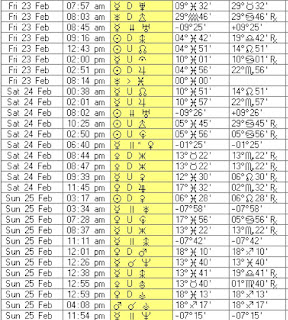 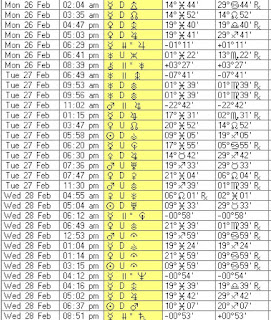 I use Neptune energy to correlate to Oil prices. 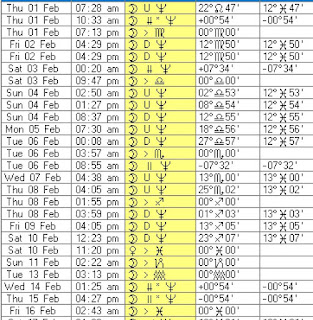 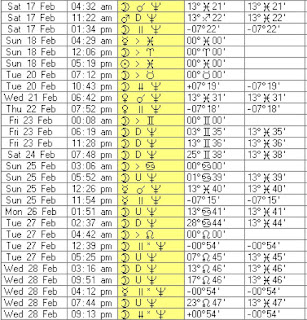 I have not counted it. But you can see for yourself moments when there is a focus of D's or U's. We do have business days when there are D's. They seem to all fall on Fridays.

Okay, you are not an astrologer, and you just want the general result. Well it looks like February will not be as positive as all the past twelve months. It will have more down days that January. But there are some great up days. This will be then a month where more selling will appear in the first half, and more supportive in the second half. You need to look at all the hours of the day, as I have only focused on the PM EU and US trading hours. So there will be more opportunities than before to short the market for longer periods of time now. As the market trend up has been very steep, the down days will slow the long term uptrend, but not break it. Hope all this helps. If you need to know what is happening in the next months then you need to pay corporate rates. Good luck and enjoy yourselves.

Click the link back to the Facebook page to see more clips, updates and other fun stuff.

Email ThisBlogThis!Share to TwitterShare to FacebookShare to Pinterest
Labels: US down then up

Well, another brilliant set of signals, that very simply and clearly predicted that the stock market and oil will go up, and they did. It defied logic and most commentators were using the old worn out, fully discounted US Tax revision as the reason.

Look at the Mars angles for January 2018. The total count is fairly even. But look at the it from 11th to 25th and we have 5U 9D. Then we have more U's. So there is wobble perhaps in the background. Any confirmation of the faster moving planet tables below, and it could be big drop. So read the next set of tables, and the summary at the end. 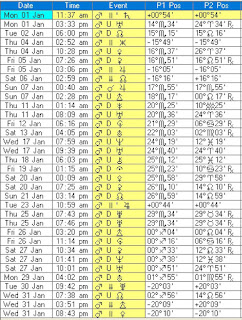 The faster moving planets and Sun.

Look at the number of U's and D's for each PM week day that I have added up. As you can see, this month we have more D's. So there will be more selling. But there are still U's.  And there are times when there are no U's with lost of D's. 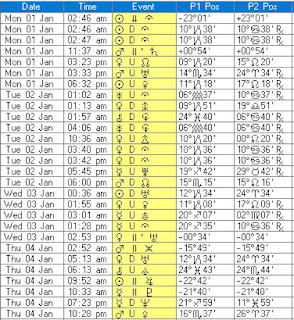 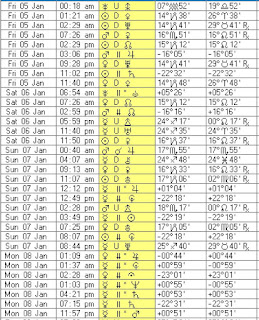 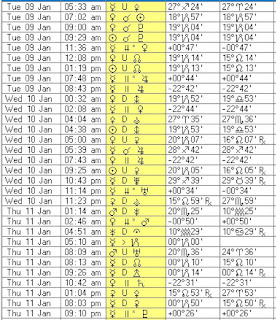 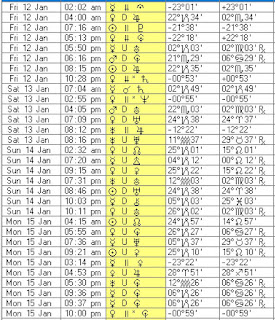 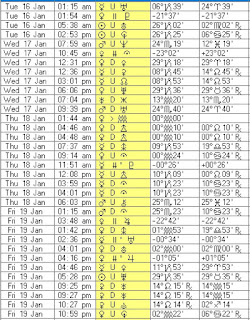 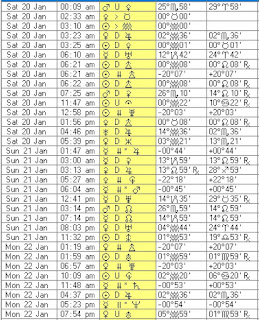 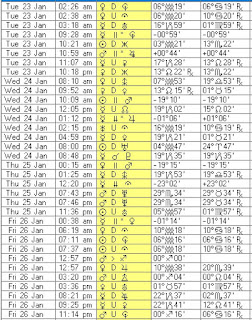 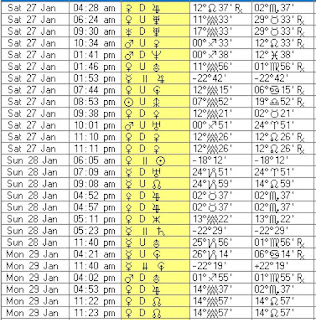 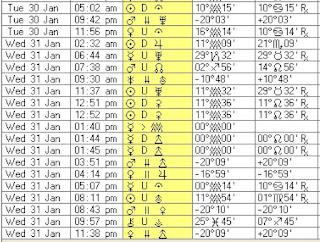 I have compared the U's and D's and they look even. Like last most the D's are mostly on week ends. So oil is still going up. 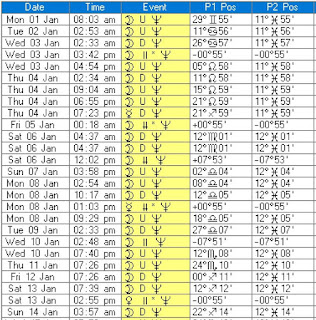 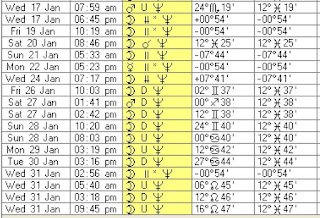 Of course no one wants the Astrology gobbledegook. What is the end result in plain terms, you ask? The stock market will take some serious falls, but it will be bounce back. It is then a testing moment. Market investors can stay away from the market when the angles are bad, and let the volume drop. There aren't too many moments with three or more D's and no U's for there to be huge selling. If you are a long term bull, then you can ride it out. If you are a fast short term day trader, you will get a lot of chances. Look for the hours when there are 2 or more D's to short it. But be careful. This is a bull market.

I have marked in bold the days which the US and PM EU trading hours have a large imbalance of either more more U's or D's. There are more D's. So it is going down, with a struggle, or slow down its ascent. Suddenly all those US Tax benefit stories will not look so great. Cynics will rule more. We will have moments when there will be a reality check.

What will it be next month? That you need to pay for. Enjoy the freebie. You could have had this last month or way back.

Remember do not use this for trading. This is a mood indicator, for life. U's mean positivism, expansion. D's mean contraction. You can use it in any environment. U's will make convincing easy. D's are contractions. There are no angle moments, that are more than 2 hours, when it will be dead boring. Look at for those boring moments. Happy 2018 for everyone.