This what I meant when I said wait for the end of the week and whether the faster entities were building on top of the slower entities' hard aspects. Your eye should pick up on the three DDD from 03:26 to 04:50. There are two hard aspects before them d and a disinclination (2:35). The bulls get their turn from 5:14 to 5:28 with Uuu. Work out the rest yourself. The key is, to have as many that are not too far and not too close. One of the same type every 10 mins in 30 mins, that is three of them gives a good move. I have seen some good moves with two powerful aspects (either a U or D) that are 15 mins apart. There are some good moves today, whatever your view is. Enjoy!
Oh btw all week I have been thinking the US is EST, and of course they are EDT still until Sunday 1st November. These times are GMT. So US starts at 1:30pm GMT. Luckily not a lot changes.
on October 30, 2009

Compare this table with the one for yesterday. The first thing I noticed was that we don't have a lot of Us, with just a two minute episode at 06:21 with a u and a U. We have more Ds. The 04:01 aspect is a hard aspect. We have a lot more hards that is Ds and ds, within and leading up to a background hard D aspect of Venus at 07:58pm. And to make sure the pressure is on, we have a d 08:48pm GMT (03:48pm EST). Watch the market as we get close to those times and make up your own mind. If you make money from this then think about this info and donate. The more donations, the more I will publish. Having said that I will not be responsible for losses. Wish you all the success.
on October 29, 2009 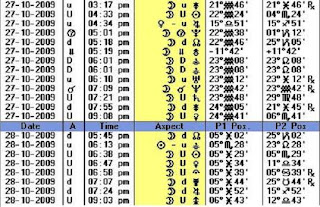 What I am doing now, is to show you just before the close what the aspects for US trading session were, that explains why it was a bit boring with little focus of strong aspects in a 30 min time period. Compare that to tomorrow. Tomorrow is odd as there are no aspects until lunch US (5:45pm GMT = 12:45pm EST). Now look at the uUUU sequence in a tight time span. That is quite a lot of punches of strong aspects. As I mentioned in the other email with Mars and Asteroids, there was a moment this week which we will get a momentary pop, or a moment to get short, if you have not already. I also said that you will only surely be able to verify that once the faster bodies are doing the same. Well here it is. Let's see what happens. The proof of the pudding is in the eating. I am not making any of this up. All this is produced by well known winstar plus software.

Predicting the markets with Astrology: 25-26 October 2009 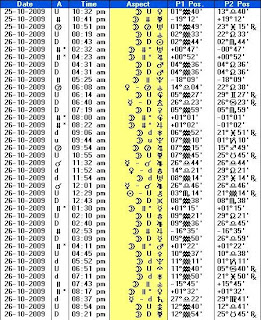 The table above has GMT times, and click to make it bigger. Look at the very limited times when there are good Ds or Us. The US start has a couple of Ds and a disinclination which is tough going. But the rest of the times there seems to be mixed, so it could be boring.
on October 26, 2009

Email ThisBlogThis!Share to TwitterShare to FacebookShare to Pinterest
Labels: new set of aspects, Predicting the markets 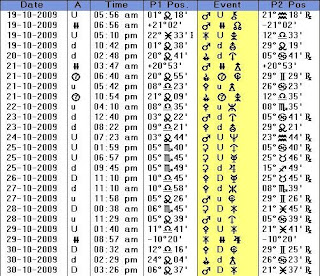 This table was created to see how really useful it could be. The one before was just Mars. This one includes the Asteroids as well. I find the faster entities eg: Venus, Mars, Sun, and Moon, have to be included for looking from one hour to the next, but not in this sort of time period.

Immediately you can see how much more D or d there are for last week. And the same is true for the coming week with the Ds there from 28th. There are a couple of ups on 28th and 29th with a U and a u, but those three downs will give it a sour ending for the week.

Obviously we can get a lot more accurate with the hourly aspects thrown in. Remember all this is for fun, and for goodness sake, don't for one moment think that it works.
on October 24, 2009

Aspects of Mars in October vs the Markets 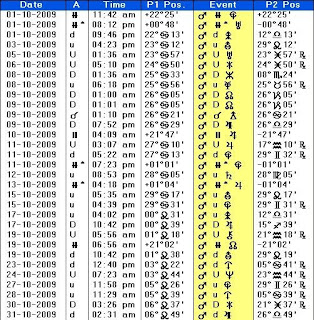 Sometimes it takes ages to come up with a very simple solution. The other day I was having a conversation with the tech section of the people who produce the software I use, called Winstar, about how it is difficult to make some representations, and I learnt that you can put your own symbols in if you want.

If you look at the table above, it has the letters D for big down, d for little down, U for big up, and u for little down. The other ones you can ask me about. The actual positions are given, so you should be able to figure it out, if you anything about Astrology.

Now, here is a little analysis for you. Look at the number of Us and you can see how Mars has managed to keep the markets up. It is really the people's optimism that the soft Mars aspects help. Hard aspects as shown by D or d, will give a negative twist to everything. So the theory is, that if we see load of either, then there is an effect.

But nothing is that simple. It fails a lot of the times, and I have lived long enough to be the first to admit when it has. This is an on going experiment. Heck it has been going now for nearly thirty years for me.
on October 24, 2009