I  must say there were some mistakes in the report published here. I got the monthly direction wrong. It seems then that the daily reports at the Facebook page are better. Certain errors were discovered and that is why this whole work is research. In as much as it has had its great moments of success, the failures make it all so much more interesting. Can humans really predict the future? It seems that we can for the next day. The Geomagnetic Activity has very strong correlations. Mars angles do correlate, but there are errors in the software and they are being spotted, and will be compensated for. It takes a period of Mars retrograde to see that. Hopefully I will get this month right. My spiritual upbringing teaches me that the greatest learning is through humility and blatant honesty. So don't trade on this report. It is just an experiment.

This month I am not going to put summaries. Look at the comments in Facebook page. The folks who have been reading my work should be able to work it out. Any D is down. Any U is up. 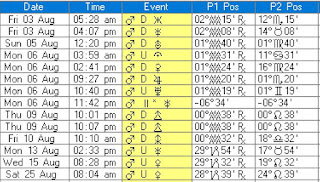 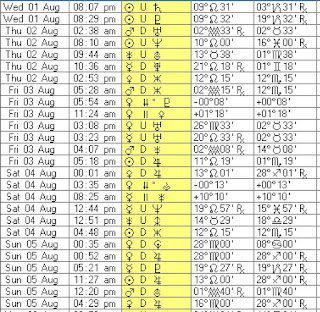 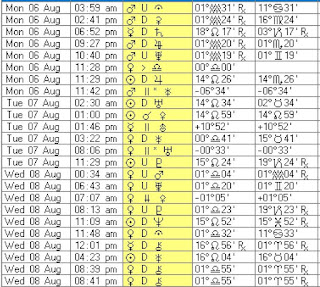 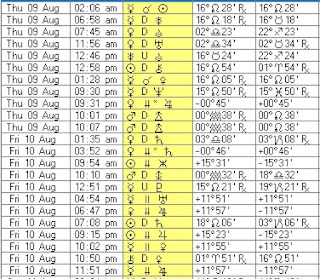 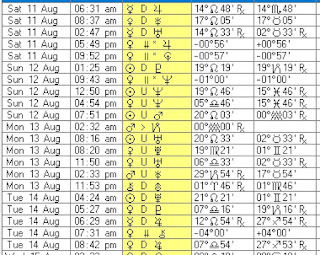 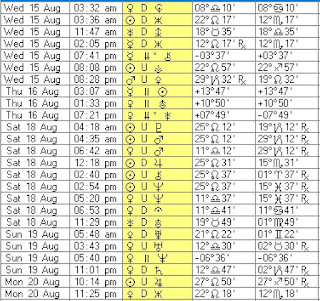 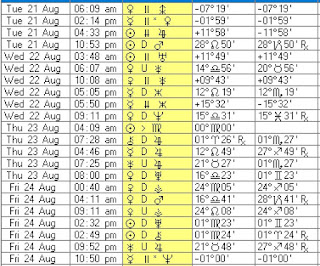 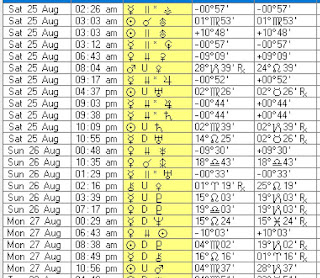 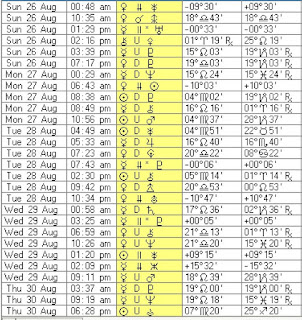 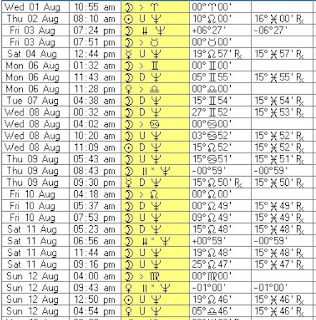 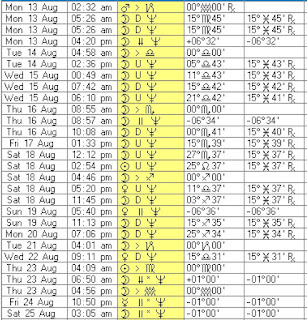 The predictions made in the comments in the Facebook page speak for themselves. The result was very good. Please have a look at the three stage process. First look at the background Mars angles, then look at the faster planets angles, and finally the geomagnetic activity.  Using different thickness of colours makes it intuitively easy. There were many moments when geomagnetic activity was the main mover, when the Mars and faster planets did not have strong angles. Overall, the market did fall as expected. In non market areas, the hard angles did support the underdogs in the World Cup.

What I do is to measure the angles that planets and Sun make to each other in our Solar System. I have been perfecting it for 40 years. This is my own home grown system. You can use it for the markets, or any living environments, especially if you are in a sales job. U moments are easy to sell your view, D moments are not. You can take people on if you are the underdog in D periods. That is why existing obstinate orders come crumbling down in D moments. Jesus Christ used the Salibeh Mehregan or the Cross to oppose. That is a D. Yes in simple terms much of this work is thousands of years old. But nowadays we can do calculations they could not. But the basic principle is the same. My ancestors The Magi knew what they were doing as Ahuramazdans. D and U are polar opposites as Ohrmazd and Ahriman. The energy is Ahuramazda. This is the ancient triad. It is not good or evil. It is like Yin and Yang and Chi.

Mars is always making an angle. It is then either in sync with a faster planets or not. So look at both, with the geomagnetic activity. 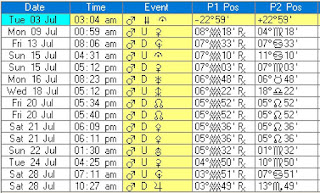 Mars aspects are balanced until the third and fourth weeks, even though it is slow and retrograde. Look at the faster planet tables below, to see whether they will have stronger angles to complement Mars, and of course the geomagnetic activity posted at the Facebook page. What you see here is a general view.

I have summarised each working day now, with the Mars background. It seems clearer. 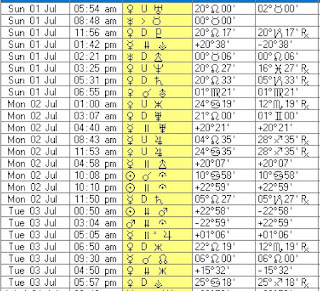 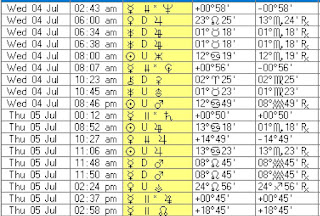 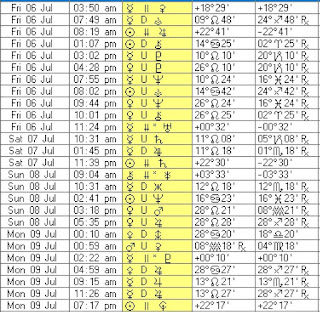 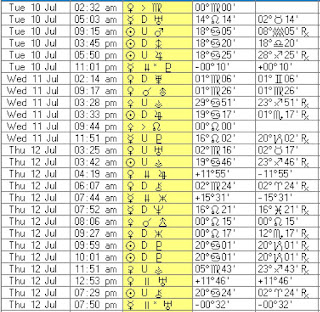 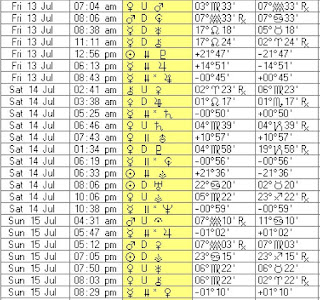 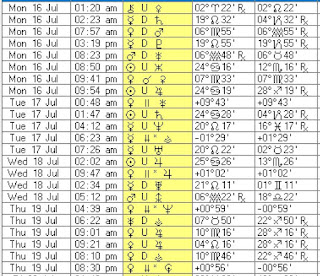 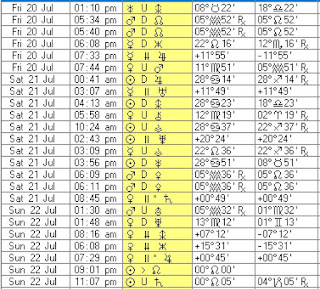 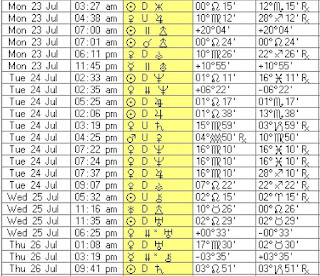 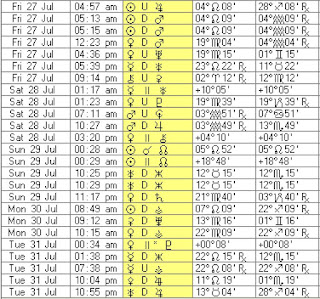 Fri is D in Asia and EU, mixed US, Mars is U
Mon is D
Tue is mixed to D

Just two days (18th and 23rd) with faster planets U's and Mars U's, means the down pressure is strong.

I am still experimenting with Neptune tables as oil now moves with the main markets. But you can see that we have more D's between Sun and planets with the Moon. So it will be down. 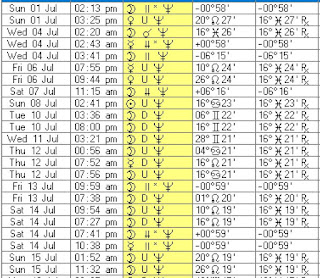 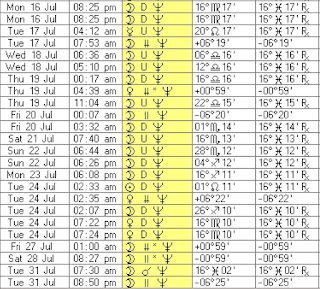 It is quite clear we have a lot of D's. In simple terms it means that the stock market will go lower. But you need to see the Facebook reports to see the details for every hour of the day in detail. Geomagnetic activity are unsettled on 11th, 15th and 19-22nd and that won't help the markets, but the minute by minute signals are from the links in the FB page.