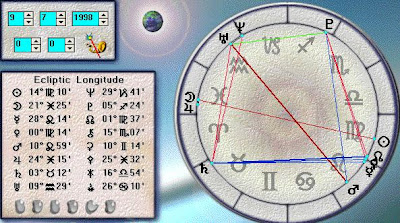 Above is Google's Horoscope, and below is the transit for today. 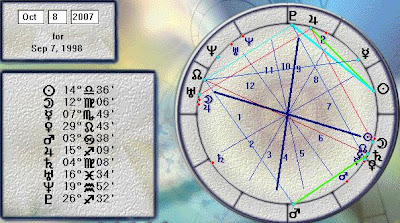 As you can see the Saturn transit is not that far away from the Sun. Saturn is 4 degrees Virgo and Google's Sun is 14 degrees Virgo.

This form of Astrology is called Mundane Astrology. Let's see how good it is. Well if you look at the movement of Uranus over Google's Moon and Jupiter, you will see why it has move up so well. Recently Saturn went into Virgo and it is now over Google's Venus and North Node. It will slowly approach the Sun. Saturn going over Sun is not good. We all know the ramifications on humans. It really brings you down to Earth. So one would expect the price of Google stock that is rocketing up, to come to a halt, and come down in the long term.

I say long term because Mars is going to be making favourable aspects in its long stay in Cancer. But to see the very short term correlations, we need to look at Venus, Mercury, Sun and the Moon on the chart. If you look at Venus, it is going to join Saturn in Virgo soon and so be there as a benefic that will cancel any negative vibes from Saturn. But once it has passed over Google's Sun by the end of this month, then there will just be Saturn. To find out more get in touch with me. This form of analysis can be done on any stock, as long as we have the date of the formation of the company.
on October 08, 2007