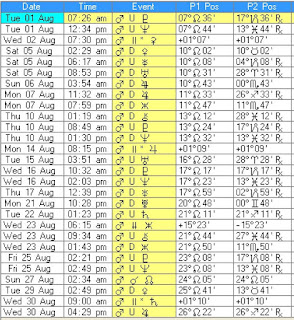 Just looking at the raw numbers for Mars, it is evenly balanced. But you can see that there is a focus of D's in the first two weeks, and then it is more U's. Translated that means that it is down for prices with high volume, or remain flat with low volume. Then it is the other way round when the U's kick in.

Now look at the tables below to see the daily changes. I will put the results on Fridays. 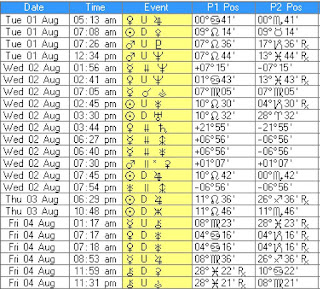 Result: Dow was up but S&P and Nasdaq were flat for the week in line with non-Mars boring aspects. Markets took a lot of heat and stayed buoyant with the Mars U's. 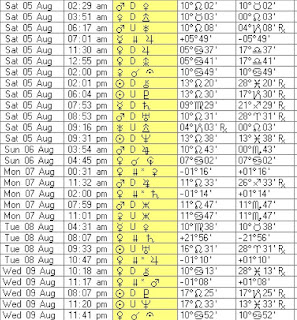 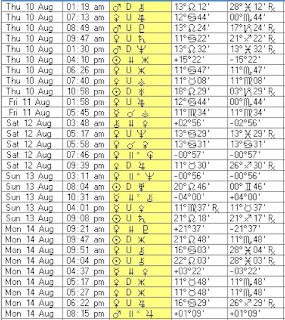 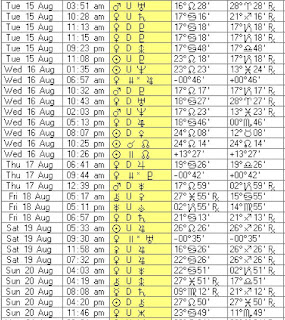 Result: Mars kept the pressure on Markets as predicted. The faster moving planets also kept the pressure. Only when the faster planets had more U's did we stay up on Wednesday. Going forward the prediction is favourable. So expect it to be easier to go up than to go down for the remainder of the month. Expect resiliency. Stocks will go up. 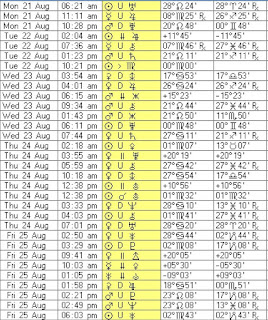 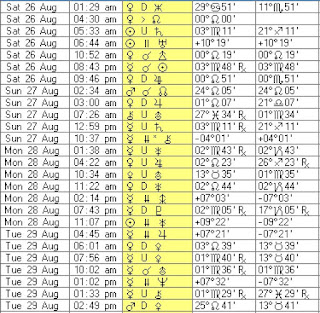 As you can see, there are no massive days for PM's. There is no big imbalance for the PM periods. But you need to do the count for your time zone. Look for at least three hour period with two U's or D's to make a focus. The opposite is also true. If you do not see anything in a two hour period, there will be no follow through. As it stands, it all looks pretty boring for the PM's, but the background Mars aspects will dominate in the quiet periods, and that says down then up for the month. So look at the Mars aspect, then see if the faster planets are adding to it, for there to be a focus, in the time period you are in.

Finally I have included a new set of tables. What I did was to strip out the Moon from the Neptune aspects. I then went back to June, so that we can see the commodity, especially Oil correlations. 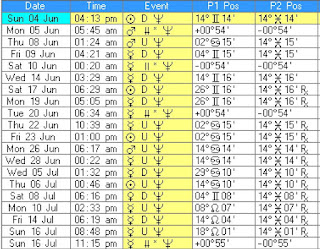 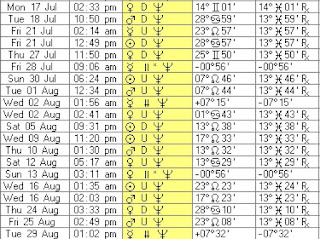 It is really easy to see how the increase in U's took Oil up in late June and then July. And looks like more of same for August.

To sum up, the mood is positive, and everyone will look at the bright side of life for August, after a bit of a pull back. But then I have been so wrong before. You decide.